September is Suicide Awareness Month which always causes me to reflect on my own journey. I want to acknowledge that as I write this it is not from my journals, but my memory, so my timelines may be skewed.

My first suicidal thoughts I remember having where in High School, but then I got involved in sports. This gave me a place as well as something I was working towards.
I would occasionally still feel my family and friends would be better off without me in there lives. I struggled with my self worth. I believe my depression and anxiety are linked to my suicidal thoughts

During my first marriage, the more abusive my x-husband became the more the thoughts crept  in, but so did the fear. He often threatened to kill me. Thoughts of death because mixed up in my mind. As I was escaping Domestic Violence my only thoughts where on survival. Then the thoughts of I should of let him kill me started overtaking my thoughts.

Now I want to be clear, that I had a good life. I enjoyed my job and hobbies I could recognize the blessing and good things in my life, but I felt used and a burden. I often felt broken, isolated, & alone.

I met and married an amazing man, but my struggle with depression and anxiety would come and go. The first time I remember having an actual Suicide plan was after having my second child. I had what I consider sever postpartum depression. I didn’t feel like myself. My husband took me to get help. I started medication as well as regularly seeing a therapist. It helped, but I got to the point I didn’t feel anything. 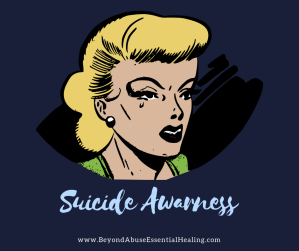 I didn’t some self improvement classes, started running and working out regularly and was able to go off the medications. I started feel good again and the suicidal thought would come, but I was able to recognize them for what they were. I had found coping tools that helped me manage my mental illness. I would put on my favorite music and go for a run until I felt better and the inner chatter was gone.

Then in 2011, I injured both knees during a 1/2 Marathon. Unfortunately this was not the first time. I genetically had bad knees and had previous surgeries. I opted to do surgery on both at the same time so I could get back to training quicker. My knees where worse than they thought and my days as an athlete where over. This was devastating and I started spiraling downward.

With my outlet gone, my mental illness once again got worse. Once again I started putting my suicide plan in place. Once again I felt like such a failure and burden. It was the only logical thing to do so my friends and family didn’t have to worry about me anymore. I was the person they had come to know. I felt like I was letting everyone down. I felt it was the only way to let them move on.

Thankfully I have friends or family would show up or call just at the right time. But at that time it was just a delay. I still had my suicide plan in my pocket. I was a roller coaster of emotions with good days and bad. For me suicide was an unselfish act. I would remove myself for those I loved and was hurting because of my darkness. I would no longer be dragging them down.

When Warrior starting getting bullied, I was not able to be the mother she needed, because I was so wrapped up in my own despair. As she became suicidal and all I could thinks was, “I passed my mental illness on to her. She would be better off with out me as her mom.”

During my last attempt, my 2nd child got very sick, so I started taking care of myself so I could take care of her. But it was until a year later as she was still fighting as we search for more answers that I realized. I didn’t want my children to have to go through life without a mother. I came clean to my husband and children. I told the my suicide plan and committed to talking about it.

I started self help classes again and found new tools to support my mental illness. I no longer carry a suicide plan in my pocket. When the battle comes back I talk about it. I ask for help. It is not easy. I still have days I can’t get out of bed, but I give myself grace, time, and love. I can also recognize that I am not alone in my mental illness and battle with suicide. I have also learned so much from husband and my children.

My heart breaks when I hear of others who lost their fight. I know it is not their fault. They could not see any other way to stop hurting and hurting those they love. I send thoughts, prayers, and love to those they left behind that they may have the peace and healing they need.

This site uses Akismet to reduce spam. Learn how your comment data is processed.